Never underestimate the power of music. No matter how plain (or just plain off key!) there is a force that flows just below the surface of the notes. A melody is a lot like one of the stones in David’s sling in the Bible story. Goliath had a serious size advantage over the puny teen-aged David. In spite of Goliath’s awesome armor and weaponry, the power of one smooth stone guided by God’s hand was able to penetrate his defenses. Music can be an armament for good if we ask God to guide it to ears that long to hear from Him.

I discovered the simple power of music from two dear shut-in friends, William and his wife Joaquina. For about two years I visited them every Wednesday afternoon and came to affectionately call them “Mom and Dad”. William began to slowly lose the use of his arms, then his legs and he became confined to his bed and recliner. William loved to hear the hymns especially the lively ones.  But William didn’t only listen to music. He found that he could still whistle a tune so one of his pass-times was to whistle to his  parakeets whose cage sat in the corner of the living room. Whenever William whistled the parakeets chirped loudly. Near the end of William’s life his family filmed a brief video of his two parakeets hopping on his chest while William whistled a song. In the battle of his life William still used the smallest melody to fight.

For those, who like myself, have chosen to do nursing home ministry, I would encourage you to prioritize music. Music’s purpose is often unrecognized and its value underestimated but in its proper place it has the power to touch the hearts and minds of people as nothing else. Whether you are an accomplished musician or an amateur. Simply share the songs of the church  and God’s message will take wings and fly! 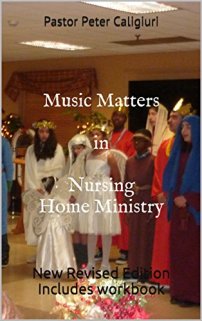 2 thoughts on “The Power of a Song”