When Jesus came down from the mountainside, large crowds followed him.  A man with leprosy came and knelt before him and said, “Lord, if you are willing, you can make me clean.” Jesus reached out his hand and touched the man. “I am willing,” he said. “Be clean!” Immediately he was cleansed of his leprosy Matthew 8:1-3 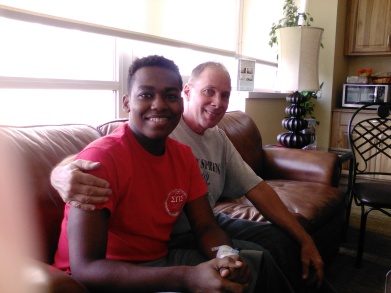 When our friend Ken was sick this year we went to visit him, to pray for him and yes, to put our arms around him. Jesus often is found touching others. When the disciples were ready to send the children away it says that”…He took them in His arms, placed His hands on them and blessed them.”

There is something about touch that transmits the love of God. In nursing home ministry we need to remember that people are often longing to feel the touch of another person besides their nurse, or their physical therapist. A while back I can remember bringing one of our grandchildren along for my weekly visit to the nursing home. At that time he was about six years old  and feeling a little nervous about going with Poppy. When we came in, I began to introduce him. I thought that maybe if he could shake hands and say hello it would help him to feel at ease. No sooner did I start but one of the ladies in the circle put her arms out to him and when he came up for a hug she swept him off his feet and put him on her lap!

I worried at first, but after a few nervous seconds he settled down and sat with her for the first ten minutes of our meeting. He was finding out that our “ministry” had as much to do with snuggling on someone’s lap as it did with singing the hymns. While I was leading in prayer, he was giving a touch that said, “You are important. I trust you. I am happy to spend time right here with you.”

But you might say, “Oh Pastor Pete that’s okay for you because it’s your ministry.” But if you know one person among your neighbors who is a shut in, or in nursing care; if you have a family member of if you know someone from your church in long term care, it can be your ministry too! You do not need to go every week, or to join a group that sings in your local nursing home. Maybe you can just go to one person this week and give to them the gift of touch. God has called us to be the arms of Jesus touching someone and giving His blessing today!

One thought on “The Gift of Touch”